Posted on January 24, 2011 by Necessity is the Mother of Invention

Gorilla Girl has a habit of hiding under furniture when she has committed an act that she knows is unacceptable or dangerous. Several weeks ago, she ran at top speed from my room, dashed under the couch and remained hidden for a few minutes.  Upon witnessing this behavior, I asked Ed, “What do you think she has done this time?”

He responded, “She’s just playing — why do you think she did anything wrong?”   I knew that guilty, chagrined, look in Gorilla Girl’s body language that screamed misbehavior because I had done it myself. I let it drop, though, despite my instincts, because I thought, well, maybe I shouldn’t assume guilt — innocent until proven guilty, right?

An hour later, I was collecting the laundry, and I noticed something shiny gleaming from under my desk.  I looked more closely — seven gum wrappers sans gum in various stages of crumpled. I brought the evidence to Ed. We showed the evidence to Gorilla Girl.  She protested at first, but there is only  so much proclaiming of innocence one can do without a lawyer in such circumstances, so she admitted that she ate the gum. All of it. Seven pieces of gum in one small child’s stomach.  We checked the internet for possible poison and emergency room scenarios and chided her to never, ever eat gum again.

We watched Willy Wonka this weekend with Gorilla Girl and Monkey Man.  Monkey Man loved the images and music, but Gorilla Girl was scared, especially at the punishing behavior meted out to misbehaving children. Despite her fear, she was also riveted by the story. She was so tired that she didn’t stay awake for the entire movie, but crashed after poor Violet turned blue and rolled off the screen into the juicing room.

The next morning, Ed and I were drinking coffee and talking with Monkey Man when we noticed that an eerie silence had fallen over Gorilla Girl’s play.  Where had she gone? We searched, but didn’t find her.  Then, during our second round of searches, I hear a rustling under our bed.  Ed reached in to pluck out Gorilla Girl, unwrapped gum clutched tightly in her hands. Ed asked, “Remember what happened to the little girl who ate gum in the movie?”

Such wailing and crying — a torrent of tears.  “I don’t want to be blue! I don’t want to be a blueberry!” We made several trips to the mirror to prove to Gorilla Girl that she was not, in fact, swelling up and/or turning blue.

A lesson learned? At least she didn’t have to get juiced! 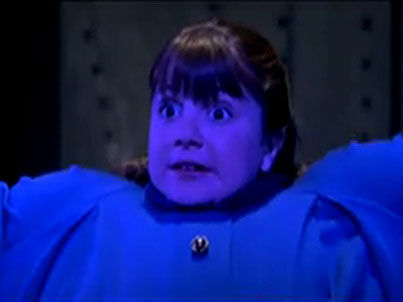