Posted on August 7, 2011 by Necessity is the Mother of Invention

Now that August is here and our thoughts are turning to the inevitable return to school and work, I am hitting my summer stride, finally. Who knew it would take so long? Maybe the mini-vacation to Holland, Michigan helped in terms of stride-hitting. On a whim at the last minute, we decided to head out a day early to meet vacationing friends.  The stars must have aligned because we got a hotel room at the Haworth Convention Center, located downtown on Hope College’s campus, and just a block from The New Holland Brewery and Brew Pub. We loaded the car with babes, beach gear, and bikes (and Joyce) and we were off.

Not much beats a picnic on a warm and breezy summer day, but one in a fantastic park with a field of wildflowers, and bordered by Lake Macatawa Marsh, is especially sweet.  Joyce loved the time there, and it set a calm tone for the rest of the day.  Gorilla Girl and Monkey Man ran to the wild flowers soon after lunch, and we explored the Marsh, and talked about cattails. 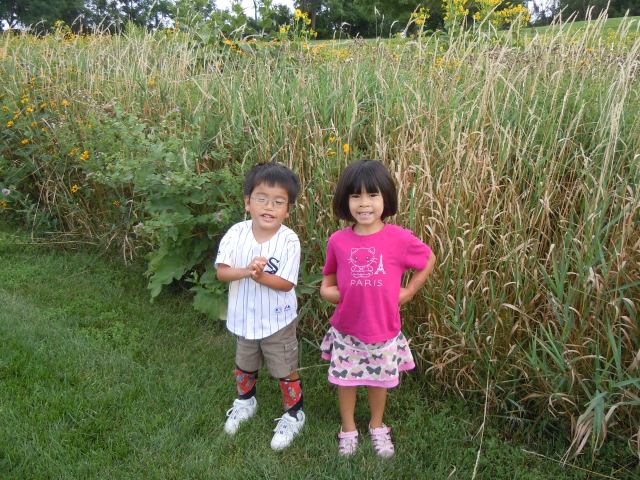 After the picnic and exploration, we drove to Holland State Park, and witnessed the awesome furry of Lake Michigan on one of the windiest days of the summer.  The lake looked more like an ocean, and an angry one at that. Though many folks were on the beach, the red flag was up, and no one was in the water.  We had come to find the bike path, so that was fine by us.  Our ride took us along the Lake Shore that leads from Holland to Grand Haven, along houses tucked well back from the road, hugging the shores of Lake Michigan. Gorilla Girl and Monkey Man endured the ride in the trailer, and we survived the windy day.

After a quick change, we made our way to the Holland Aquatic Center for some family fun in the kid-oriented pool with an entire play ground built into the foot and half pool, complete with many water propulsion devices. Gorilla Girl and Monkey Man wanted to stay longer, even though they were turning blue with cold.  When I told GG that I had to leave because I was turning blue, she looked at me with alarm.

“You’re not going to be a blueberry like the girl in Willy Wonka?” she asked. She noted that I didn’t look nearly as blue as that girl, and seemed relieved that even though she, GG, was turning blue, her blue coloring was only temporary.

Ed noticed that all day long, we had no fights, no spats, no whining, and on the positive side, everyone seemed happy for the change of pace, scenery, and activity.  I suppose this is why people go on vacation. We talked of the improved vibe that visiting a new place brought the whole family on the way to the New Holland Brew Pub. Even waiting outside for a table was painless, as Gorilla Girl and Monkey Man played a game of “let’s hug each other and dance.”

We settled in with crayons and the kids’ menu for entertainment, and sampled the beers.  We admit it, we are beer snobs, and even when we venture out, bravely, sticking a toe in other waters, we always come home to Bell’s Beer. After one beer at New Holland, I was ready for something else. And because we only had a short walk to the hotel, I decided upon a Bloody Mary, a drink I haven’t ordered in at least fifteen years. Change is good, right? That’s what they say, but in this case, that change, like a slumbering volcano, brought first an eruption, then the meltdown.

Gorilla Girl snagged the plastic drink sword from the Bloody Mary as soon as I’d cleared the pickle and olive, and proceeded to poke Monkey Man.  He cried — and to be fair, it is a plastic sword, so he was more annoyed than hurt.  I decided to remove the offending sword to bring peace at the table for the remaining moments of our dinner. If my first mistake was the Bloody Mary, my second was taking the sword from Gorilla Girl. That slumbering volcano I mentioned, yeah, that was her.

She let out a shriek, burst into tears, and refused to calm down. Ed took her outside, and Gorilla Girl flailed like a banshee, while I scooped up the bill and Monkey Man. By the time we reached the sidewalk, GG was no longer lying on it, but she was instead keening in such a mournful way that passersby must have thought her favorite pet had died. Ed walked her down the street, found a bench and spent a good thirty minutes, maybe more, trying to calm her. He shooed Monkey Man and me away, and we made the most of it, buying a scoop of chocolate ice cream to eat on the sidewalk.

In the aftermath of the eruption, I worried about the intensity of Gorilla Girl’s reaction to the “no” of the sword. I worried about the need to have things. To accumulate, to store, to collect.  I worry, too, about the deep pain Gorilla Girl felt over such a small and inconsequential object. I suppose because Monkey Man and Gorilla Girl are the same age, I don’t have a frame of reference (“Oh, Baby Joey did that too, at that age”). How do we know what is a normal four-year-old tantrum?

The next morning, when Gorilla Girl was happy and calm, Ed mentioned that a passerby the previous night noticed Gorilla Girl and said, “Oh, I did that too, when I was a little girl.” Who is to say what is “normal” for a kid? Maybe it is just our (my) parental anxiety that flares up in these moments.

Perhaps the tantrums of Gorilla Girl should be measured against the general outpouring of love, spirit and energy that define most of her days.

5 Responses to Holland, Michigan: beaching, biking, and melting (down)