Posted on March 16, 2012 by Necessity is the Mother of Invention

It’s spring break, but it’s still winter.  It’s nearly 80 degrees in the yard, and the trees are all but bare, a few buds tentatively peeking through.  Daffodils are blooming, despite a shed perched right over the flower bed. 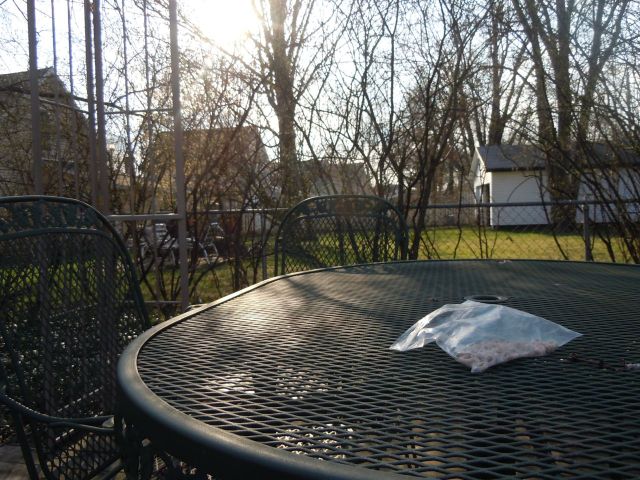 Gorilla Girl, Monkey Man, and I spent the day outside, riding bikes, playing at the park, digging in the sandbox in the yard, kicking the soccer balls around.

In the back of my mind was the cheese soufflé that I was supposed to make for FFwD. I had the ingredients, read the directions, and was ready for my inaugural attempt at this classic French dish.  I had even decided to make small single serving soufflés, and to halve the recipe.

I started the béchamel sauce, way ahead of time — and in halving it, got a lumpy and paste-like goop that seemed more like something I could use to pave the driveway than like an ingredient for the lightest, fluffiest dish on  earth. I put the “sauce” in the refrigerator, and decided that either it would soften or I’d make another attempt.

The goop formerly known as béchamel sauce was still like concrete when I let it come to room temperature in my kitchen (which was pretty toasty given the heat outside). I opted for a youtube tutorial, and hoped for a better outcome.  The second time around was less lumpy, but still too thick.  After only a tiny bit of consideration, I dumped in some cold milk while stirring vigorously over low heat, and  didn’t even measure, but just kept pouring until the sauce seemed like sauce.

While Gorilla Girl and Monkey Man played in the yard and imitated my peripatetic cooking with the sand (which would have produced a smoother sauce than my first attempt), I prepared the rest of the soufflé.  Admittedly, I was not the most attentive soufflé maker, but since the sauce was already questionable, I figured I’d give it a go, and we could order pizza if it was a total fail.

At some point, while the soufflés were in the oven, my oven shut itself off!  It has done this to me before, and I am not certain how or why.  I noticed, but the temperature had fallen to 300, and it took a while to get it back up to 400.

However, despite the sauce, the oven mishap, and constant interruption, the soufflés looked sort of like soufflés.  Mine tasted delicious, what with all of that airy eggy and gruyère savory flavor.  Perfect for a meatless Friday (despite my lapsed Catholic status).

My oven is still cooling down, but those hot out of the oven soufflés were worth the trouble.  Better than an omlet, more satisfying than scrambled eggs, these soufflés are worth their weight in gold.

Kind of like Monkey Man and Gorilla Girl playing in the yard on spring break — simple, yet satisfying.