Posted on February 3, 2012 by Necessity is the Mother of Invention

When I was in France with KDM, she tried to get me to eat stinky cheese.  I gave it my best shot, but each stinky cheese, with its bluish veined ripples of bacterial and mold infection, and its pungent aroma, just overwhelmed my senses, and I couldn’t indulge in the way of a stalwart Francophile. I’ll have to turn in my beret!

However,  I do think I’ve found a compromise — or at least, I’ve eaten mildly stinky cheese and enjoyed it. Maybe the trick is to put the stinky cheese in a lovely pastry tart with eggs, cream, and onions. Dorie’s gorgonzola apple quiche was so scrumptious that even EE, on his low carb diet, indulged in a teeny-tiny sliver. Gorilla Girl tried it because of the allure of the apple, but her nose wrinkled upon sampling a mouthful — apparently, the stinky cheese aversion runs in the family, if not in the DNA.

This quiche is not only my first successful stinky cheese experiment, it is also my first quiche — period.  It did take me two tries on the tart dough, however, the first one crumbling like sand on a hot summer day beneath my exhausted fingers.  Dorie gave directions for dough made by hand and by food processor.  I was arrogant — and thought that my experienced pâte brisée making self could easily handle this. Ah, the hubris of a few simple non-egg based rustic tarts made successfully. 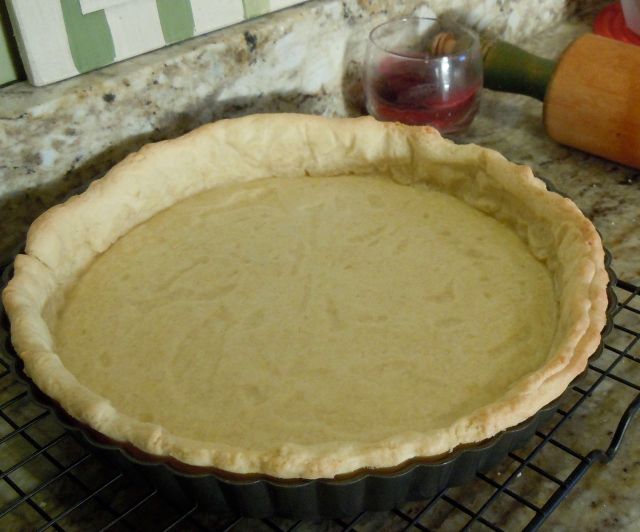 After the dough crumbled in my hands, I decided to try an old stand-by,  and I used Deb’s great unshrinkable sweet tart shell, with super results. Deb’s Smitten Kitchen recipe is remarkably similar to Dorie’s, but it didn’t require weights (a plus), and it did use a food processor, so I just licked my wounds and dumped the ingredients into the processor (and then cleaned it — part of the reason I eschewed using the food processor in the first place was to avoid washing extra dishes).

Oh, and the bonus with the tart dough — with the extra, Gorilla Girl happily rolled, molded, and sculpted for quite a long time.  I only captured the butterfly, but she also made a snowman, a happy face, and several other abstract designs.

The overall verdict, despite my failed tart dough on round one, is that I’ll now have the courage to attempt more recipes with stinky cheese, and I’ll also make a few more quiches swapping in various other non-stinky cheeses and vegetables.

You can see the stinky cheese in this close up

For more insight into stinky cheese apple tarts, see what other home bakers created on French Fridays with Dorie.