Elixir of the gods or French Cooking 101

Posted on January 13, 2012 by Necessity is the Mother of Invention 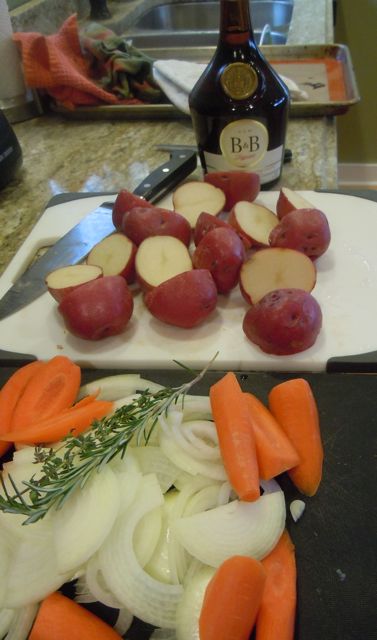 Our neighbor calls B & B French cognac the elixir of the gods, and on two occasions, I’ve shared snifters with him.  I have to agree, and I am not much of a brandy or cognac drinker. In fact, until recently I’d never heard of or tasted B & B, but when out to dinner with a neighbor who suggests an after meal drink, you just play along, and are sometimes pleasantly surprised.

Dorie herself notes in the recipe that the pan sauces generated by this dish are good enough to be termed an elixir, and she urges her readers to be sure to serve the chicken with a “sauceboat” of aforementioned elixir. I followed her urging. 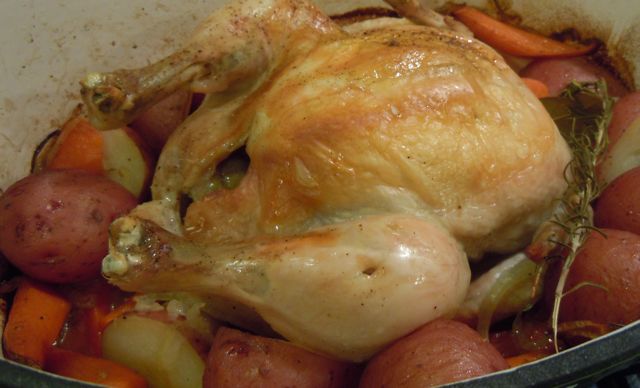 This Friday’s recipe (m. jacques armagnac chicken) from Around My French Table called for armagnac cognac, but because I went out looking in our small town, the local Pharmacy (which sells everything from plumbing supplies to alcohol), only carried Hennessy and Dom B & B Liqueur, French Spiced & Fine Cognac.   The B & B was so tasty in a snifter, I figured it would be awesome poured over my roasted chicken and vegetables.  I was not disappointed. The chicken and vegetables were melt-in-your-mouth delicious, and Gorilla Girl kept asking for more carrots, calling them “candy carrots” because they were so sweet.

The only small problem with my step-by-step direction following was that cook time with the chicken was  a bit wonky.  Oven temperatures  fluctuate, and when I lifted the lid from my roasting chicken and vegetables, I was not met with the golden browned chicken that Dorie promised. However,  I only had to cook for about 15 minutes more, uncovered, to achieve the right meat temperature and color. Aside from that small detail, the recipe is perfect, and perfectly easy.  My friend, JD, says french cooking is too complicated, and that may be true of some of those desserts, but when it comes to meat and potatoes, this one rocks simplicity-wise. 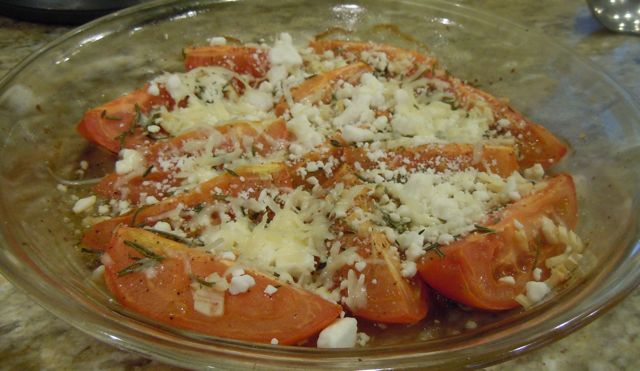 Since this recipe was so dang simple, I upped the ante with the addition of Provencal tomatoes and marie-helene’s apple cake. The tomatoes seemed to lend themselves to alteration, so I added a bit of goat cheese and parmesan left over from last week, and the cheese added a savory, smooth touch that was a nice complement to the chicken.

Maire-Helene’s apple cake also allowed me to use up some apples that had been hanging around, and it was super simple as well.  Gorilla Girl helped by taking the photos of me whisking the batter (and by grabbing a few chopped apples), and then she helped out even more by eating two pieces of cake for dessert. One of the best things about cooking is watching the folks who eat your cooking consume with gusto and pleasure.

And this apple cake is almost gone, but I am sure it will be a wonderful breakfast treat with a cup of coffee.

21 Responses to Elixir of the gods or French Cooking 101