Posted on October 26, 2011 by Necessity is the Mother of Invention 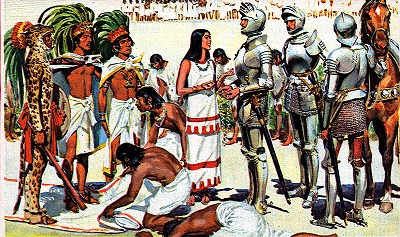 Meeting of Cortez and Montezuma

My students are studying “Encounters” between Columbus and the Taino, between the Aztecs and Cortes, between the English at Jamestown and the Powhatan. We’ve spent quite a bit of time investigating the miscommunication between the groups founded upon each group’s bias or point of view. For example, when the Taino gave Columbus a golden crown in exchange for the red cape he bestowed upon the Taino leader, the Taino “read” this exchange as an opening of trade between equal partners, while Columbus “read” the same exchange as an acknowledgement of acquiescence to his power, and agreement that the Spanish should possess the lands occupied by the Taino. 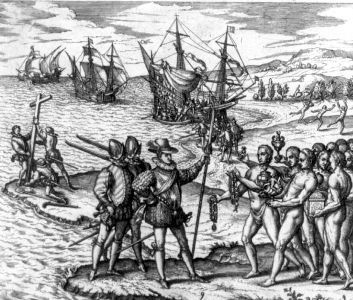 These cultural miscues often have had disastrous, even genocidal, consequences for the non-Europeans on the other end of the “encounter.” My students are eagerly invested in unpacking the language and symbol of early American encounters, and they bring to that investigation a healthy dose of understanding of the Eurocentric bias that pervades many of the primary sources available to us. Like Stephen Greenblatt, we comb the sources, looking for commensurability — moments of connection — amid the chaos of the encounters. We even listened to spoken Algonquin dialects, just to see what it might have been like to exist in such a space of linguistic incomprehensibility.

On the surface, this seems like an exercise in historical understanding, perhaps even empathy. But as I consider what I’ve been hearing on the radio, and as I recall my own comments about the lack of real dialogue in America, I am struck by the uncanny presence of incomprehensibility that pervades our current lives as Americans. Presumably, we are all members of a coherent, structured culture that inculcates values, beliefs, assumptions, hopes and fears within us somewhat commensurably. Yet, even in the simple moments, like my husband’s description of a pep rally at his school, I find myself uttering comments like, “I have no context for understanding the value system behind this — fill in the blank.”

My students have offhandedly mentioned that the Wall Street Protestors seem “not to have a focus or set of values” that guides their endeavors.  I, on the other hand, feel deeply connected to the beliefs about democracy, fairness, and a sustainable society that underpin the motives of the Wall Street Occupiers. How is it that we who speak the same language, have been raised in the same country, have attended similar schools, consume similar media, have such divergent and incomprehensible notions? 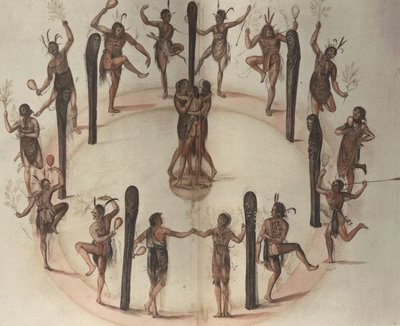 While I am a self-proclaimed nerd when it comes to picking apart these early Colonial encounters, I have only recently begun to connect the cultural disconnect to my current life experience.  At this moment in American culture, we are poised on a precipice, it seems, of decision-making.  However, our decisions are clouded by the lack of understanding, lack of compassion, lack of a sense of fairness that pervaded some of the most egregious encounters of Colonial America.

It is hard to comes to terms with our generational culpability for the Eurocentric bias that allowed near genocide. Students struggle with this, but often they suggest that we can learn from the historical mistakes, that we can act in alternative ways when faced with such divergent values. Perhaps that is easier said and practiced when the “other” is more identifiable as such.

In our times, “the other” looks an awful lot like us.  It is hard to imagine that we speak an entirely different language, that our symbols and gestures produce chasms of  perception rather than meaningful comprehension.

My students are not yet ready to take on the big questions of the sustainability of our current systems, but if we don’t act now, if we don’t find ways to move beyond our self-serving point of view, we won’t even give my students a chance.