Posted on July 25, 2011 by Necessity is the Mother of Invention

Gorilla Girl has been making new pictures lately, as an addition to her budding work in photography.  She draws animals, people, g00-goos, houses, boats, cars, trains, designs and decorations.  She sketches flowers and mermaids, family and friends.  Most importantly, she gives freely her creations to us and to her friends and neighbors. 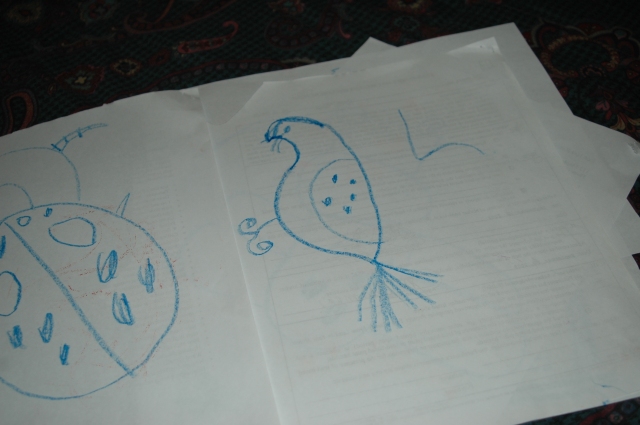 In this bird and lady bug drawing, Gorilla Girl worked fast, and sometimes I wonder about getting her to slow down, to concentrate more.  Then again, it is her art, done in her way, and I don’t want to interfere with her process. She is easily enthused by a new idea for something, draws hundreds of that thing (mermaids, for example), and then moves on to a new image once she has satisfied herself with the repetition of the current image.

I don’t have her artistic ability, and when she asks me to draw something so she can use it as a model, she cups her hands to her mouth and giggles at my feeble attempts. She knows what she wants, and sometimes gets frustrated by her own lack of control over her chosen instrument. Mostly, though, she repeats and tries again until she is satisfied with the resulting image.

Gorilla girl seems to get enjoyment from designing a colorful picture, adorning it with small items that she can tape to the image, creating what looks vaguely like a frame around the image and then autographing it and giving it as a gift. She unexpectedly gave away just such a work the other night to our friends. It was truly amazing in its layout and use of space. 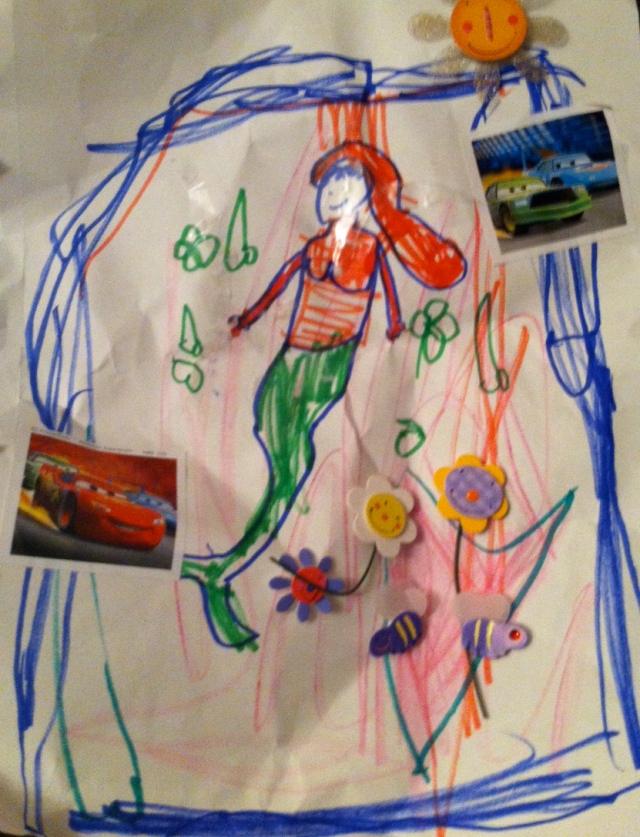 Sometimes, the sheer number of papers produced by Gorilla Girl overwhelms, and I find myself grabbing fistfuls of scraps that ultimately end up in the trash.  Should I be keeping these in order to archive her “early years”? How much is worth saving, and what do I keep and what do I toss? When the level of production is so vast, I can’t possibly keep it all without building a barn for more storage.

I do try to pick and choose, to save the best, most creative bits. Gorilla Girl will have to be okay with that, and hopefully, her art will continue to grow and shift, so that she can one day look back with glee on the remnants of her early attempts.