Posted on May 9, 2011 by Necessity is the Mother of Invention

We’ve been spending time in St. Joseph, Michigan at the Children’s Museum which happens to house a large carousel, artifacts and a miniature replica of the original Coney-Island Like Silver Beach Amusement Park.  Gorilla Girl loves the carousel, and its menagerie of animals — we’ve ridden a cat, a flamingo, several bejeweled horses, and spied a panda, clown fish and half mermaid/half horse for future rides.

On our last visit, on Mother’s Day, we spent some time exploring the intricacies of the miniature replica of the “original” Silver Beach.  It was built by Ralph Kitron — and his vision includes his own narration of the origins and demise of the Park.  Kitron’s replica is complete with lights for the nighttime rendition of the Park, and is stunning in its attention to detail.  Though the replica has a framed Southwest Michigan News Herald clipping to accompany the display, I couldn’t find a copy of the actual article.  However, I did find this brief story about the modern incarnation of the park and its facilities. In it, I learned perhaps some explanation for the jarring experience I had while listening to the voice-over narration of the model in action:

From the Lake Michigan Shore Style and Culture Blog:

When Ralph Kitron was a kid, he says he has fond memories of fishing with his dad at the end of the pier at Silver Beach. So it’s no wonder then that Kitron included a miniature version of himself and his dad, fishing on the pier, as part of his model of Silver Beach that he and his girlfriend donated to the Silver Beach Museum, where it will be on display for years to come. 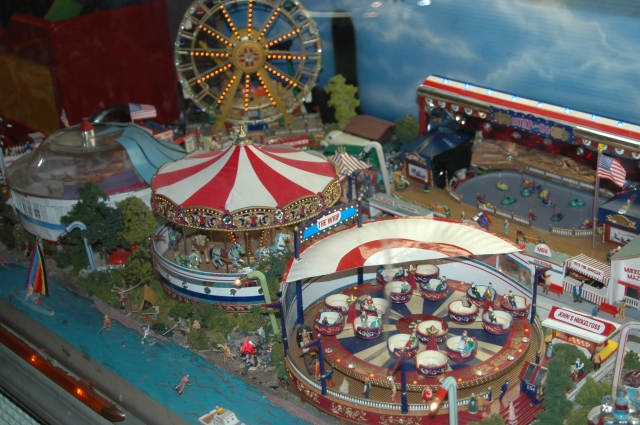 Not only did Kitron include himself, he included the “young toughs bussed in from the Southside of Chicago and Gary” who, according to Kitron, brought about the demise of the park. Kitron’s nostalgia for “simpler times” in this case seems a euphemism for times when whites could enjoy public amusement without ever having to encounter an African-Americans. In Kitron’s narration, we learn that “someone got the bright idea to bus in loads of kids from Gary and the Southside of Chicago.” For our benefit, and to show he meant what he said, he included a police altercation with the “young toughs” in his model — and you can see the bus adjacent to the police car. 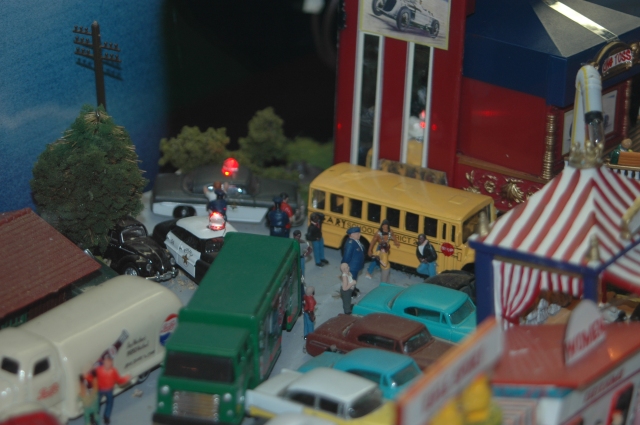 I listened to the narration for a good five minutes with mounting interest, but when the voice oversimplified the public’s declining interest in parks like Silver Beach and Riverview in Chicago, I realized that I was standing on familiar ground — the  bigotry that led to block busting in Chicago, white flight in major US cities, declining Public School Systems, and a lack of investment in true citizenship that keeps most people of different races from seeing common ground.

The incarnation of Silver Beach in its 2011 form is just as exclusive as the 1958 version that Kitron has memorialized.  In the three visits we’ve made to the Museum, Beach and Carousel, I’ve seen only one African-American family.

Kitron’s nostalgia seemed rooted in fear, in the fear that to this day locks Chicago as one of the most segregated cities in the country. St. Joseph, Michigan is just across the St. Joe River from Benton Harbor — and the divide between rich and poor, between white and black, remains deeply entrenched. Alex Kotlowitz documented this deep troubling divide in his book, The Other Side of the River.  Kotlowitz’s blurb about the book confirms my own perception about the times I’ve visited: “St. Joseph is a prosperous lakeshore community, 95 percent white, while Benton Harbor is impoverished and 92 percent black.” It isn’t only about the numbers, but also about how we use the spaces open to the public.  How are poor people or black people kept from enjoying the Lakefront that should be free and open to all?

I am troubled by the replica and its narration, but, because Gorilla Girl loves the carousel and because all of us love the beach, I suppose we will continue to visit.  In our own way, perhaps we bring some small measure of diversity to the place — with our Vietnamese children in tow. However, I’ll remain uneasy, and I’ll be on the look out for ways to counter Kitron’s vision and for another way to retell the story of public spaces.